Teams were taking part in the Chuck Vernon tournament for the Elite 8, the Patsy Odden tournament for large schools and the inaugural Dorothy Howard championship for small schools.

The Elite 8 championship came down to two dominant teams: Noble and Greenough, which entered the final having not lost a game the entire season and winning the Harrington tournament, and Phillips Academy Andover, which had a solid run of its own.

Here's a breakdown of what happened at the NEPSAC girls prep school finals tournament last weekend: 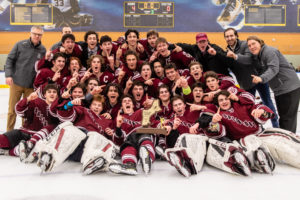 AVON, Conn. -- The team of destiny struck again and will be playing for all the marbles for the third year in a row as…
Read More
Advertisement