Senior Brian McGrath (Worcester, Mass.) is in the midst of a fourth stellar season for Fitchburg State. (Frank Poulin Photography)

The holidays are over, filed away with the tournaments that were played (and others that were, unfortunately, canceled due to COVID protocol issues).

From now until the end of February, conference play is front and center. And to compete for a conference title, one non-negotiable asset a team has to have is strong goaltending.

Who have been New England’s best netminders so far? Eight players, both known quantities and relative newcomers, have impressed the most. Every day in the run-up to Amherst College’s season-opening game on Nov. 19 at Hamilton, sophomore defenseman Connor McGinnis received a text message from his…
Read More 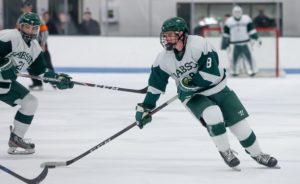