Michael Callow (South Boston, Mass.) of St. Sebastian's is a Harvard recruit and prospect for the 2022 NHL Draft. (Dave Arnold/NEHJ)

Eight midget teams from New England will compete for a USA Hockey National Championship over the course of the next week.

Mount Saint Charles is the only team from the region with a spot in three midget divisions, 15 Only, 16-U and 18-U. The Boston Junior Eagles and Yale Junior Bulldogs have teams at 16-U and 18-U while the Minuteman Flames have an entrant in the 15 Only division. 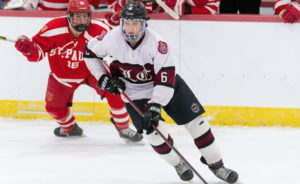