On Saturday afternoon, St. Lawrence beat top-seeded Quinnipiac with a sub-.500 record to become ECAC champions and punch its automatic ticket to the NCAA tournament.

UMass Lowell was looking to complete a Cinderella college hockey day a few hours later and only about 90 minutes north in Amherst, Mass., where it looked to win its second Hockey East championship in the past four tournaments.

However, the River Hawks’ run — following victories over the tournament’s top seeds in the first two rounds — was stopped short against their continually budding sister program from the other side of the state. Third-seeded Massachusetts edged past Lowell with a 1-0 win on its home ice at Mullins Center to claim its first-ever Lamoriello Trophy in only the program’s second-ever title game appearance. 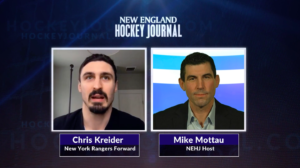