The top Division 1 college hockey series in New England this past weekend ended rather fittingly as Massachusetts and Northeastern split to keep the top two slots in the Hockey East standings, but the Minutemen remain atop the New England Hockey Journal Top 10 after opening that series with a dominant Friday win.

UMass Lowell continued its winning ways with a sweep of Vermont, while Boston College remained between the Minutemen and Huskies as Hockey East’s No. 2 team. New Hampshire and Maine also posted conference victories, while Providence earned a non-league win over its city rivals from Brown.

Yale, Dartmouth, and Harvard all returned to ECAC play and split their weekend games. In addition, Quinnipiac beat Boston University for the first time ever in, literally, the waning seconds of a key non-conference game in Boston. LOWELL, Mass. – College hockey teams spend all week preparing for Friday night. But sometimes the game plan gets tossed out the window and proceedings…
Read More 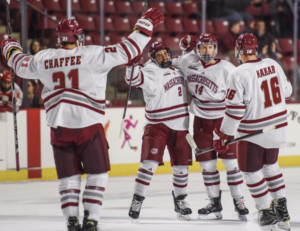 AMHERST, Mass. — Friday night proved to be yet another emphatic statement made by the UMass hockey team. The convincing 6-1 win over Hockey East…
Read More There is a winter storm coming to New England this weekend, but there’s also some pretty important college hockey. The home-and-home series between UMass and…
Read More