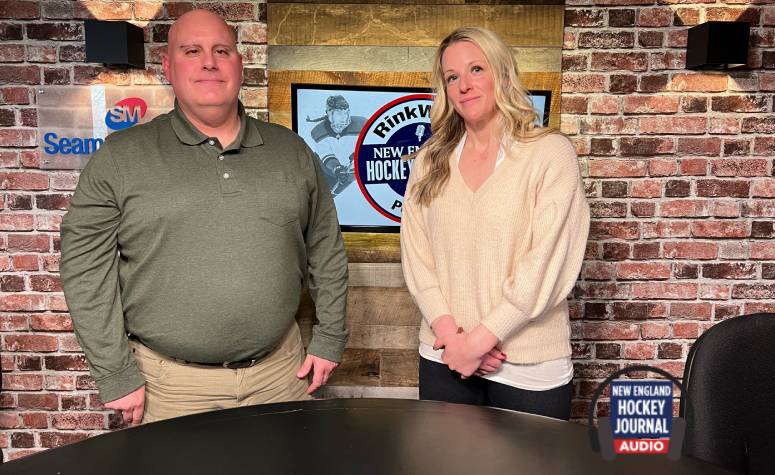 Stephanie Wood, the coach of the girls hockey team at Austin Prep and the women’s director at the Islanders Hockey Organization, is the guest on the newest episode of the RinkWise podcast.

Wood recently led Austin Prep to the Division 1 MIAA championship. With a 4-1 win over Arlington on March 20, Wood’s team clinched a perfect record of 27-0 during which they outscored their opponents by a whopping total of 156-11. A native of New Brunswick, Wood played hockey at Northeastern, where she later joined the basketball team after completing her hockey career. Wood joined us to talk about her Austin Prep team’s dominating run, her career and how to grow girls hockey.

On the impact of winning a championship at Austin Prep:

Absolutely unforgettable year. This is just something that we’re never going to forget. And this group has been able to cement themselves as the most successful sports team in the history of Austin Prep athletics. And I would probably argue MIAA in general. But this group was just completely motivated and bought in from the beginning.

So I would take it back all the way to the summer and the offseason. Simply put, they worked extremely hard for their success. I have to give a lot of credit to our seniors and particularly our captains, Lauryn Hanafin in net Maeve Carey on defense, Isabel Hulse on forward and Kathryn Karo on forward. They did a great job leading the team.

They did an outstanding job mentoring our young players. And when the going gets tough, they put the team on their shoulders and they carry them.

On the importance of encouraging girls to be multi-sport athletes:

For parents when you’re trying to educate them, sometimes it’s a hard concept for them to understand that by playing different sports you are ultimately going to help them be the best hockey player they can be. And sometimes it’s hard to make that connection at a young age. But for example, on the girls side, it’s thought that the golden years for development, so meaning the years when they can get as many athletic characteristics as possible, is thought to take place at U8, U10 and U12. So kind of in those early years.

So I know when I coach at those levels, I certainly encourage it because the more motor skills, coordination, agility, that kind of thing that they can get at those ages, that just means that their blueprint for athletic development is going to be that much greater than somebody that did not do those different activities.

Anything that you’re trying to grow, you need to start from the bottom up. … the bottom of your pyramid is where you need to start. So that being the Learn to Play, the U8 levels. When I talk to our families, I say for us that is the most important age level that we have. So not only is it the base of our pyramid, but it’s also the base of their hockey blueprint. So the instruction and what they’re getting at that age is really the most important and that’s going to set their blueprint for where they can be down the road.

So where I insert myself is at the base of our pyramid. So that’s what our U8s. So you will see me going from an Austin Prep high school practice, jumping on with our U8s Islanders to run their practice. I have to just kind of shift my brain a little bit before I get with the younger kids.

So I will insert myself there and then often I’ll put myself with like our 19 Tier 1, which is the last touch that they have before going to college. So at that stage for us, that’s when most of those girls are trying to move on and play at the next level, i.e. college. So I just find that it’s very important that I’m there as well. So I put myself at the bottom, at the top of the and then kind of filter in wherever I can.