Quality play between the pipes continues to be a recurring storyline in the 2021-22 boys prep hockey season.

New England Hockey Journal attended two games on Wednesday, and the goaltenders made a difference in both contests. That is not to say that the skaters failed to do their part, or that other storylines and trends were lacking. Both goaltenders shined in a Belmont Hill road contest at Brooks School, with a gritty effort from Jake Inzirillo for the home team. Although he wasn’t able to prevent a 3-0 loss, both Inzirillo and Sam Scopa (Lexington, Mass.) showed why they are near the top of prep hockey’s statistical leaders.

In Groton, Governor’s Academy senior David Palandjian (Concord, Mass.) turned aside more than 40 Lawrence Academy shots from an active Spartans team that is putting on a more consistent offensive push in recent games. Luc Gagnon (Natick, Mass.) made some athletic stops to keep the visiting team from coming away with an extra point, as the game ended in a 2-2 draw.

Outside of the superb play in net, several forwards and defensemen attracted positive reviews for their strong play in both games. While the team currently sits below .500 with a record of 5-7-3, one bright spot for Governor’s Academy this season has been the emergence of…
Read More

The top teams in prep hockey are certainly distancing themselves from the field as Avon Old Farms, Kimball Union and Belmont Hill appear clearly in…
Read More 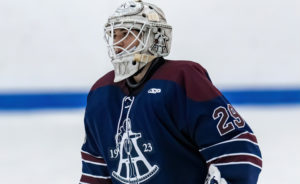 As the midway point of the 2021-22 prep hockey season in New England approaches, now is a good time to look at who are some…
Read More
Advertisement