Dylan Hryckowian scored in the prep championship game, solidifying his case to be Elite 8 MVP (Photo by Dave Arnold/NEHJ)

The upper echelon of prep hockey continues to separate itself from the rest of the field as less than a month remains in the 2021-22 season.

Avon Old Farms remains atop the New England Hockey Journal Prep Hockey Power Rankings as the calendar flips to February. While the top three are the same as last week, some teams have moved around and a new team has entered the top 10.

A couple of marquee games dot the schedule this Saturday as Salisbury travels to Cushing and St. Sebastian’s hosts St. Mark’s. Both matchups will have a significant impact on next week’s power rankings. 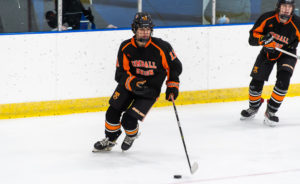 Prospects: 6 under the radar prep players who are ready to shine

Continuing our broader look around the rinks at prep hockey in 2021-22, we focus on six players who have caught our attention in recent live…
Read More EXETER, N.H. — A Saturday winter storm that brought the area’s biggest snowfall of 2021-22 could not prevent the matchup between Cushing Academy and Phillips…
Read More
Advertisement