Northeastern University introduced Jerry Keefe as men’s hockey head coach this week, and New England Hockey Journal was there to go one-on-one with him at the conclusion of the formal press conference.

Keefe, 45, has been with the Huskies since 2011 as an assistant and associate head coach. His strong relationship with former bench boss and new NU athletics director Jim Madigan, created a seamless succession, the latter crediting Keefe with sharing the same values and vision. This made it a “no-brainer” in Madigan’s words, to promote Keefe to take over the men's hockey program.

As far as the team is concerned, Keefe needs no time to familiarize himself with the situation and can get right to work in terms of finding a new assistant coach to work alongside Mike McLaughlin. That continuity will serve the student-athletes well, but look for Keefe put his own stamp on Northeastern hockey as he develops his own coaching style. Analysis: What to expect from Northeastern head coach Jerry Keefe 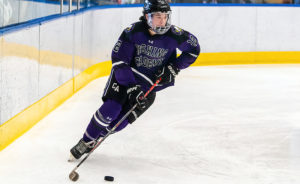