Could Michael Fisher go as high as the third round? (Photo by Adam Richins)

With the Montreal Canadiens winning the NHL Entry Draft Lottery Tuesday, now is a good time to revisit some area defensemen who could be selected in early July.

The NHL's Central Scouting Service released their final rankings last week, with New England well represented on the list. The draft will be in Montreal, with the host city and Bell Centre atmosphere sure to be electric, as the league has its first live draft since 2019.

Having previously looked at several New England forwards who could be intriguing draft options, we’ll focus the attention on the blue line. This is not a comprehensive list of all available area defenders, but a sampling of prospects who are worth getting to know and track as the big event gets closer.

So let's dig in and examine Michael Fisher, Jackson Dorrington and others. 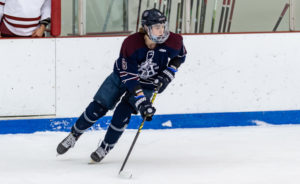