Teams get ready for puck drop during a NEFPHL Prep Prospects League game.

Some of the region’s aspiring prep hockey players, born in 2005 and 2006, showcased their talent this summer in front of prep coaches at the 2019 NEFPHL Prep Prospects League.

The league had four teams and games were held Tuesday night at the ICenter in Salem, N.H. Governor’s Academy coach Brian McGuirk, a former player at Boston University, ran the league with different prep coaches getting behind the bench each week.

The NEFPHL Prep Prospects League had a few players who will undoubtedly go on to make a splash at the prep level and potentially make it to college hockey in the future.

Here’s a look at 32 players who stood out at the NEFPHL Prep Prospects League in three separate viewings this summer: 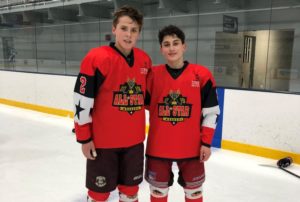