Pope Francis and BC High players battle in the 2019 Super 8 finale, won by BC High in quadruple overtime. (Dave Arnold/NEHJ)

The MIAA hockey committee won’t let the Super 8 go down without a fight.

In the wake of the Tournament Management Committee’s April 15 decision to shelve the Division 1A tournament, better known as the Super 8, for the next four years, the hockey committee voted unanimously to appeal the TMC vote to the MIAA board of directors.

On May 10, the board voted 15-0 to delay the decision until the TMC and the hockey committee have a chance to discuss the possible change in the coming weeks.

“We would just like the opportunity to sit down and give our opinion on this,” said board member Dan Shine, Arlington Catholic boys hockey coach. “We just haven’t had that opportunity yet.” It will be at least four years until the Division 1A tournament, better known as the Super 8, has a chance to return to Massachusetts…
Read More 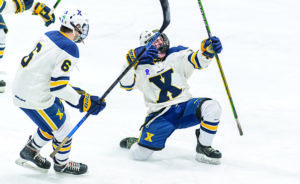