WEYMOUTH, Mass. — The first game of the MIAA Division 1 hockey tournament was without suspense. No. 33 King Philip clobbered No. 32 Weymouth by a score of 7-2 in front of a packed crowd Monday at Connell Memorial Rink.

Much of the crowd was left deflated after just one period as King Philip raced out to a 4-1 lead after 15 minutes of play. King Philip’s first line, made up of all seniors, jumpstarted the team’s offense. Left wing Shaun Fitzpatrick scored four goals and added two assists. Right wing Nolan Feyler scored three times and had a couple of helpers. Center Ian Hill notched three assists.

Weymouth’s season comes to an end at 6-14-2. Junior center Andrew Ferguson scored a first-period goal to cut the lead to 2-1 at the time. His linemate, senior left wing James Flaherty, scored a goal in garbage time to make the score 7-2. The Wildcats emphasized a physical brand of hockey, but it wasn’t enough to overcome the wave of offense from the visitors. 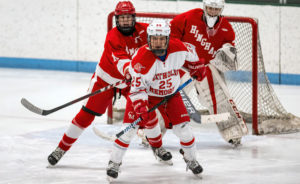 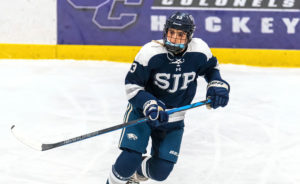