Burlington and Winchester players line up for the national anthem prior to their Middlesex League showdown on December 18, 2019.

WOBURN, Mass. — Despite the cold temperatures outside, the intensity was heated inside O’Brien Rink as Burlington dispatched Winchester, 2-1.

Burlington jumped out to a 2-0 lead after one period and hung on late for the win after a second period tally from Winchester cut the deficit in half.

The Red Devils improved to 1-1, bouncing back from a 4-1 opening night loss against Woburn. It was the season debut for the 0-1 Sachems, playing under first year head coach Geno Khachadourian, formerly an assistant at the Rivers School. 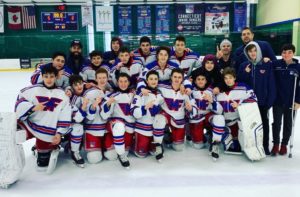 STAMFORD, Conn. -- Ten of the top 14-U teams in the country, along with a lot of terrific prospects on those teams, converged on Chelsea…
Read More AVON, Conn. -- Eight of the top prep teams in the Northeast are headed to Avon Old Farms Thursday, Friday and Saturday for the annual…
Read More
Advertisement