She loved the idea of carrying on the family tradition of strong goaltending. Harvard University fans still sing the praises of her father, Chuck Hughes, who backboned the Crimson to the program’s only national championship.

Listed as standing 5-foot-9 - he said he was actually 5-8 - Hughes filled up the net nicely during his Harvard career, especially on April 1, 1989, the night he made 32 saves to fuel the Crimson past Minnesota in a 4-3 overtime thriller in St. Paul, Minn.

“I wanted to follow in my dad’s footsteps,” Hazel said.

She was a goaltender, from age 5 to 10. Then the boys she was playing against started firing shots into corners. Hughes found the net too big to cover.

“I loved playing goalie,” she said. “I loved being challenged. It gave me a level of excitement to play goalie. There was too much net (to shoot at) when I was in the net. I didn’t think I was good enough so I switched to forward.”

Hughes, 15, is one of the top scorers at Worcester Academy despite only being a freshman. Utilizing a strong hockey IQ and elite speed, the Lancaster, Mass., native is a threat to find the net every time she hops over the boards. Craig Churchill didn’t know the name of the player. He had no idea she was the daughter of a Hobey Baker Award winner who went…
Read More ‘She has the ability to make plays that don’t exist’: Meet Cushing’s Sammy Taber

Necks craned. Heads turned. Mouths opened. Sammy Taber can be shy. But she wasn’t that fall 2019 day when she donned a penguin costume and…
Read More 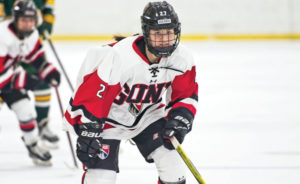