The Neponset Valley River Rats 14-U reeled off six straight wins to claim the title at the Eastern Alliance Kickoff. (NV River Rats)

FOXBORO, Mass. — The Neponset Valley River Rats captured the title in the 14-U division of the Eastern Alliance Kickoff by downing Bishop Kearney Selects, 6-5, in the championship game at the Foxboro Sports Center.

The 14-U division was played mostly at the Canton Ice House and Foxboro Sports Center. The top three teams at the event were the aforementioned River Rats and BK Selects as well as the Boston Junior Eagles. One of the pleasant surprises of the tournament came as a result of a much improved Yale Junior Bulldogs squad.

Monday afternoon’s final was a wildly entertaining, back-and-forth contest. There were power-play goals and shorthanded goals. There were momentum swings. The game had it all and the atmosphere in the rink was great with loud and supportive cheering sections on both sides. The River Rats, coached by Dan Panciocco, and BK Selects, led by first-year head coach Ben McManama, gave it their all in a grueling seven games in four days. 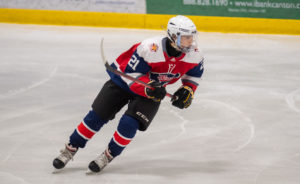