Captain Liam Darcy (East Waterboro, Maine) has been a key player on the University of New England blueline. (Photo by David Bates)

The University of New England has staked its claim as one of the top programs in New England, a status accelerated by the opening of the Harold Alfond Forum nearly a decade ago and the hiring of Kevin Swallow as head coach in 2015.

But this season’s been anything but typical.

Tuesday’s 3-1 win over Curry pushed the Nor’easters into a first-place tie in the Commonwealth Coast Conference with Salve Regina with five games to play. 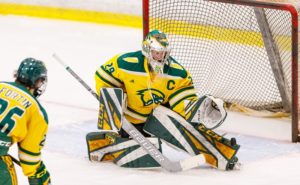 How surging Colby has grabbed control of the NESCAC

After skating off the ice following practice on Wednesday night, coach Blaise MacDonald (Billerica, Mass.) was asked about his points of emphasis as his rolling…
Read More
Advertisement