Mid Fairfield 16-U won the state championship over the weekend with the help of '05 defenseman Sloan Farmer. (Dave Arnold/NEHJ)

MARLBORO, Mass. — Talent and will won out for all three Mid Fairfield Jr. Rangers teams that traveled north to participate in the Connecticut state Tier 1 playoffs Nov. 12-14 at the New England Sports Center.

With victories over the Elite Hockey Program (18-U) and South Kent Selects Academy (16-U and 15-U), Mid Fairfield ran the table in the Sunday championship round, winning the state competition for fall hockey.

The players will now disperse to their respective schools for the 2021-22 prep hockey season before coming together in March to compete for the New England district regional playoffs for the chance to punch their ticket to the Tier 1 National Championship held in Plymouth and Rochester, Mich. March 30-April 4, 2022.

Several teams had to complete the playoff schedule without the benefit of Avon Old Farms prep players, who were not made available to their respective split season clubs. No team was more affected by that and injury attrition than the Mid Fairfield 18s, who captured the division state title with just nine players but won their championship game by a 5-0 score. The 16-U and 15-U squads had closer to their complete rosters available and were able to win their respective deciding contests 3-0 and 6-1.

With the Massachusetts Tier 1 playoffs also occurring simultaneously at the NESC, here is a quick snapshot of some of the highlights from the competition New England Hockey Journal was able to directly observe, focusing on the winning teams who got it done. 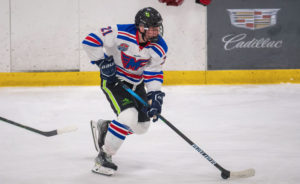