Tyler Boucher, who played at Avon Old Farms, could be a draft option for the B's. (Rena Laverty/USA Hockey)

The Boston Bruins will be up to make their first-round choice in the 2021 NHL Entry Draft’s first round at 21st overall Friday in the league’s second straight online/virtual event due to COVID.

The pick will actually be the 20th selection, given that the Arizona Coyotes have forfeited their first-round selection (they were also docked their 2020 second-rounder) as punishment for violating the NHL’s combine physical testing policy. It is the highest position in the draft for the B’s since defenseman Urho Vaakanainen went 18th overall in 2017.

With just their third first-round pick on the clock in the last five drafts, the pressure is on for the team to identify the best possible option for them, which could also be a need-based pick if it all lines up right.

Regardless of what you hear about the 2021 draft class being relatively thin after the top tier, there are always future NHL stars and impact performers to be found outside the top-10. With unprecedented challenges relating to the ability for NHL clubs to regularly scout players across the major feeder leagues that would happen in a normal season, a lot is on the line.

The following prospects are potential first-round picks based on projection, talent, style of play and other factors gleaned through live viewings and film study, plus engagement with myriad scouting sources across the community.
An obvious Bruins choice like U.S. National Team center Chaz Lucius or Chicago Steel winger Matt Coronato would be terrific given their natural scoring talent and high NHL ceilings, but the possibility they will be available at 21 is remote.

This analysis focuses instead on players who have a better chance of being there when Don Sweeney makes the call. 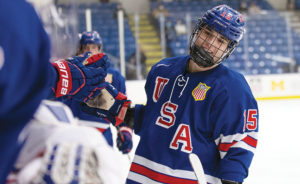