Alex Jefferies ultimately would like to play in the NHL. (Mark Zajkowski)

Alex Jefferies shoots a lot of pucks. Not just in games, not just in practice, but all summer long.

And, no, before you ask, he doesn't shoot at a dryer like a certain Sidney Crosby did all those years ago while developing his legendary shot.

Jefferies, 18, is a right-shooting right wing from Lunenburg, Mass., in his second season with Gunnery, the prep school in Washington, Conn. His shot is a thing of budding legend. During the recent Avon Old Farms Christmas Classic tournament, he exhibited pinpoint accuracy against Kent in the final, sniping one goal from a tight angle that still hasn't been seen by the goalie. 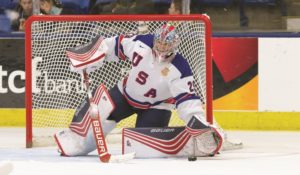