Just because Spencer Knight resides in his own little world — the goaltender’s crease — doesn’t mean he’s unaware of the praise that’s being heaped upon him.

The 17-year-old netminder knows that National Hockey League Central Scouting in November gave him an A rating on its Players to Watch list. He realizes this grade means he’s considered a potential first-round pick, in his case in the 2019 NHL Entry Draft.

But that doesn’t change a thing about his approach to his craft.

“You can’t let all those distractions get in your way,” Knight said. “For me, the biggest thing is to remember why you play hockey, because you love the game. It’s fun. So you just have to come to the rink, have a positive mindset, take each day one day at a time and not worry about the external stuff.”

D1 men: UMass vs. UMass Lowell kicks off a return to action post-break 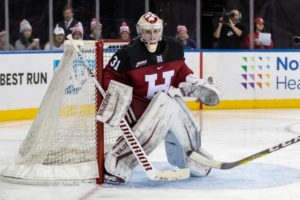 BOSTON -- Two points mean the same at every point in the college hockey season, but they’re especially important at this crucial time of the…
Read More