Sam Hesler and the Big Green are 2-8-1 in their first season under head coach Reid Cashman. (Doug Austin/Dartmouth Athletics)

Justin Pearson summed up the feelings of every Ivy League hockey player in a simple, single word.

“Excitement,” said the Nashua, N.H., native forward who is one of three seniors on Yale’s roster and the team’s top returning scorer entering the 2021-22 season. “We’re excited to get back to the rink for practice, excited to play that first game, excited to see what comes of this season. It’s an amazing feeling. Everyone has been working hard and raring to go.”

For Pearson, his Bulldogs and their New England-based rivals from Brown, Dartmouth and Harvard, that feeling hasn’t resonated in quite some time. 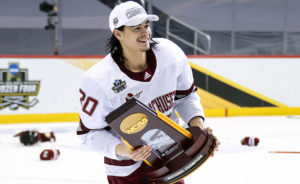 A sense of normalcy is in the air as the 2021-22 men's college hockey season arrives this weekend. After last year's shortened season was delayed…
Read More Only four members of the women's ECAC were in action during the 2020-21 college season. After an uncertain offseason, the Ivy League, which accounts for…
Read More