UConn coach Mike Cavanaugh has his team in a good position heading to the tournament. (UConn Athletic Communications)

Mike Cavanaugh has been the coach of the University of Connecticut Huskies since taking over for the 2013-14 season.

An assistant and then associate coach for 18 years under the legendary Jerry York at Boston College, Cavanaugh was reportedly on the verge of quitting coaching before taking the job in Storrs. He's now in his seventh season with UConn, and has overseen the transition of the Huskies to Hockey East from the Atlantic Hockey with middling results in the standings.

But this season, despite a 2-5-1 start (including 0-4-1 at home), the Huskies are on the verge of posting their first winning record in Hockey East. Entering the weekend with a 12-9-2 record (15-14-4 overall), they have one game remaining, against tough opponent UMass-Lowell on Friday. Playoff hockey is a different beast. No matter what happens in the five months leading up to the Hockey East tournament, it feels like anything…
Read More 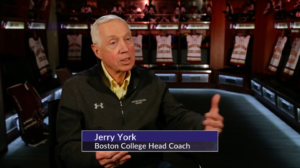