FOXBORO, Mass.- The Summer Prep League’s first week kicked off Monday night at Foxboro Sports Center. New England Hockey Journal was there to observe the top players from the (mostly) 2003-05 birth years, with a few 2002 and 2006-born prospects sprinkled around the four-team rosters.

One key omission from the printed league rosters was Cushing Academy and Boston Jr. Bruins forward Cam Lund, who by virtue of being selected to play in the Hlinka Gretzky Cup next month, reportedly opted out of play this month to avoid the injury risk. Even without Lund, who is expected to skate in the USHL this season for the Green Bay Gamblers, there was a lot of solid local talent on the ice.

Here is a quick roundup of the standout performances in the first week of play, closing out the July 4th holiday weekend. These are just my raw observations taken from my scout’s notebook- this is not intended to rank or project players, but should be taken in the context of instant analysis of summer hockey. 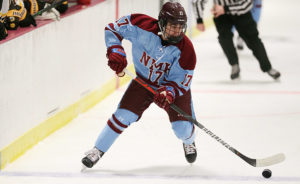