Four New England natives and six other players playing their college hockey in the region were named to the final United States roster for the 2019 IIHF World Junior Championship on Sunday, but the future of the Boston Bruins will also be on display during the tournament that commences on Wednesday in Vancouver and Victoria, British Columbia.

Defenseman Urho Vaakanainen was a late addition to Team Finland’s roster on Friday and will see game action for the first time since spending nearly two months on injured reserve. Boston’s first-round draftee from 2017 gives the B’s six prospects bound for World Juniors, representing a handful of different countries.

“Hopefully these guys can use the World Juniors as kind of a spring board,” Bruins head coach Bruce Cassidy said before Saturday’s win over the Nashville Predators at TD Garden. “You're playing against your elite peers, so if you can do well there it bodes well for your future.”

Vaakanainen, the team’s No. 18 overall pick in 2017, played in six games for the AHL’s Providence Bruins and a pair for Boston earlier this season before suffering a concussion that sidelined him since Oct. 30. The smooth-skating blue liner had recently been cleared for contact this week before he was named to his country’s roster for the third straight year. 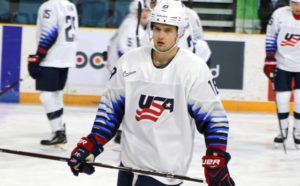