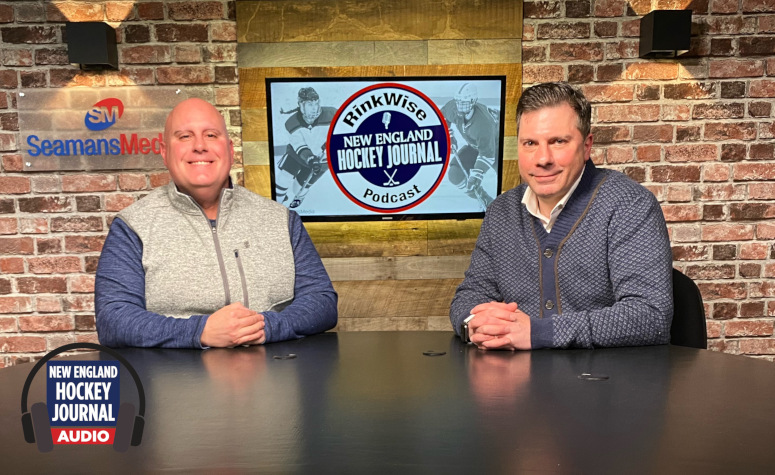 BHA, a Midget Tier 1 AAA full-season hockey academy located in Cambridge, Mass., is in its third season since being formed and partnering with Matignon High School to provide hockey players with the opportunity to develop and grow in the sport, both academically and as citizens.

Franczak joins the show to discuss BHA’s values, how the academy model came about, what the BHA and the Imperials programs are doing as part of the modern New England minor hockey landscape and more.

On the importance of developing well-rounded athletes and people on and off the ice:
Franczak: “No matter what you do in a career, all roads end at the beer league. I was telling that to Bob Sweeney last week at a Bruins game. Bob played a lot of games in the NHL, and he’s still playing in a league. One of the things that he and I talked about is how important it is that players, no matter what level they end up at, can do other things — that they can be contributing members of society.

“I think that’s one area where we differ from pretty much all of the other programs and is one of the reasons why I founded the Imperials and BHA, is we wanted to create well-rounded individuals who were very good hockey players, but that when their career is done, we gave them some skills and some resources to be successful off the ice.”

On parents stepping back and enjoying the moment/process of their child’s playing days:
Franczak: “I think that’s an important lesson that as parents try to guide their child — I had a child and I went through this process — try to take moments to enjoy the time that you have with your child while they’re playing hockey because it goes fast.

“Now my son is a second-year business major at UMass Lowell. He’s not playing, but looking back, I enjoyed every shift that he had in high school. Even though he was a third or fourth-line guy, it was one of those (things) where I just took the time to step back and I wasn’t worried about shifts and power plays and if he’s on this line or that line. I just enjoyed being in the rink and watching him play.”

On the inception of the Imperials and what the program offers to prospective players:
Franczak: “I really didn’t like often how people talked about other programs or even other leagues. I just felt it was really negative, and I wanted to create a program with the Imperials that tried to get rid of the negativity and tried to be Switzerland and get along with everybody, but also invite families in to have conversations to say, ‘We will give you a great playing experience, and some teams will be better than others, but what you will come away is you will be armed with enough information so that your high school child will be able to go to his high school team, do the best he can to try to make it, and you can enjoy watching him play, whether it’s at Varsity, JV or whatever.'”

On the expansion of BHA and plans to put girls academy programs into competition:
Franczak: “Matignon is very keen on this, so we will start with probably a U18 team and then a U16 team, and then we’ll do a U14 team eventually. And that will take time. We are going to go out and we’re going to be looking for a women’s director with major credentials, and we’re going to follow the same model we did with the academy and the Imperials. We started out as a Tier 2 split-season program with five teams. Now we have 14 teams at both the Tier 1 and Tier 2 level, including two girls teams.”

On the core values of the BHA and Boston Imperials programs:
Franczak: “The first core value that you need to have if you play for our program is you need to have a work ethic. The second one is what we call relentless improvement. And what that means is during the course of your experience, whether you’re on a split team or at the academy, you’re going to have good days and bad days, and it’s how you react on those bad days that determines how well you’re going to succeed. The third one is being a good citizen. … That, at the end of the day, combined with a work ethic, is going to create a well-rounded human being who happened to have a great hockey career. That’s what we’re looking for.”

On prioritizing finding the right kids over the most talented kids:
Franczak: “To put a baseball analogy on it, I would rather hit base hits instead of home runs, because I think at the end of the day we’re going to be here a long time. We’re new to the hockey community … and we want to be in the conversation for one, but I’m happy right now having great young men and future young women, and be 10-30 in the country, and these kids go on to great careers at wherever they go.

“We’ll take our chances at a national championship but we’re not going to turn our roster over to bring in a stud forward and cut a kid who is on our third line when he’s a good contributor to our program.”